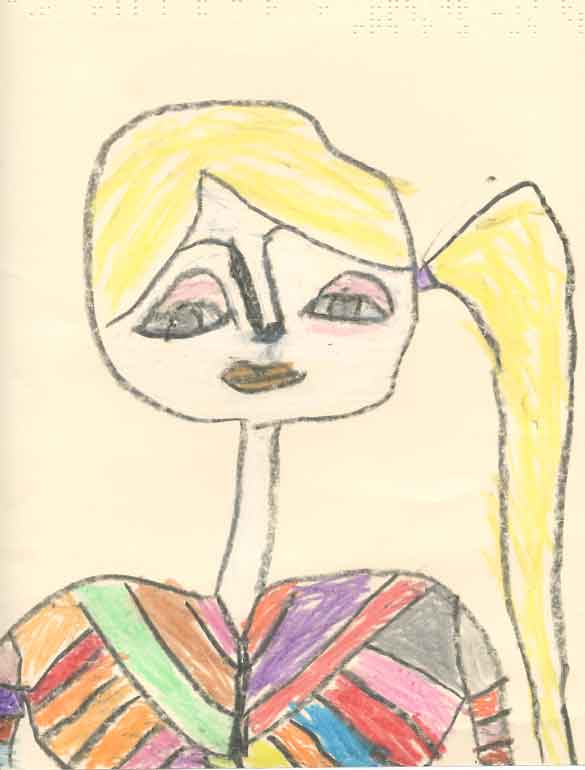 A few weeks ago I was given this drawing. It is a portrait of me drawn by a fourth grade student named Aiko. She told me she drew it special, with pink eye shadow, a “stylish” hair-do and–I particularly love this– a fancy wetsuit. Aiko is a smart, precocious, spunky and outgoing girl who loves to learn and has lots of friends at her school. Her teacher calls her a gift to everyone in the class. Aiko is severely vision impaired. (You can see her braille writing at the top). When I asked her aide how much she can see, she said she has one “pinhole” of vision in the periphery of her left eye.

I posted this on my Facebook page, along with the description, and immediately got about 50 “likes.” People who commented said it was inspiring, sweet and beautiful. A few made mention that they were delighted by the off proportions, especially the portrayal of my neck which is long and graceful like a swan, wouldn’t you say?

A few weeks later, one of the art blogs I follow, The Painter’s Keys by Robert Genn, made a post about former President George Bush’s painting “hobby.” While George Bush doing paintings is not new news and we have seen the quirky dog and cat paintings all over the internet, this critique was focused on his vast collection of portraits.

All politics aside, the first comments on the blog were surprisingly fierce. “Professional” portrait artists quickly weighed in with all their really hard criticisms on his choices of color,  his missing sense of proportion and overall execution. Most agreed that Bush clearly showed no chance without some serious schooling and should give it up. In a little while, some artists–me included–defended the self-taught, non-art-school, late blooming creative who has the guts to pick up a paintbrush at all. I’ll admit that I found him a disastrous world leader but I actually quite like his art. I think it’s rather nice in its non-perfection. I am pretty pleased with his animal paintings and feel curious about his attraction to portraiture.

Yesterday I did a show in Philadelphia. I have been an artist who does street festivals for about 15 years now so I have heard everything when it comes to what people will say about another person’s art–including one of the most amusing comments, “I could do that.” But yesterday a woman came into my booth and, after studying my paintings, prints, and my books for some time said, “It’s so nice that you have a hobby like this.” Hobby. I know that most of the general public has no idea what it means to really be an artist and to actually choose this way to make a living. It’s funny that she could look around at a booth like mine and consider this a “hobby,” isn’t it? And, I really take all these comments in stride, of course, but they do make for good Facebook discussion topics and this one struck a big, humorous chord with my fellow creatives.

So, all these things get me thinking about how we all perceive art. Who gets to put something weird out there and not get shot down by a world full of critics? Is it OK to slam a grown man who hasn’t been to art school, but not a little blind girl? Is it a valid perception to view some people as having art hobbies, even if they are obviously “working”? My friend and colleague, Paige, posted a brilliant response to my Facebook post on hobby artists:

Do you think at the root of it might be that some people have had it so thoroughly pounded into their brains that a person can’t make a living being creative that they assume it must be a hobby? You do amazing work,Dar, and have so much to be proud of. And a huge part of what I think you’ve accomplished is not being dragged down by that lie that most people succumb to—which is that it’s not even possible, and that work is definitionally something that sucks. You know what I mean?

Yes, I do  know what you mean, Paige. And I think you’re right. When we are adults, perhaps most of us feel that the thing we work at must be hard and unpleasant. Maybe we also believe we must be schooled and certified to have it be real. I love what I do. I support a family doing what I do. I work at it every day, sometimes with weird and long hours. It is not always easy and I often feel the pressure of deadlines and the expectations of others. But it also brings me immense joy and it makes me feel fully human. I get the feeling that Aiko and George both know that feeling, whether or not they have to pay their rent with their portraits. I am of the opinion that anyone who wants to criticize me or any other artist should meditate a little bit on what probably deserves a little self-reflection.

TRY THIS WEEK: Quiet the critic.