Monday #51: The Ant & The Grasshopper 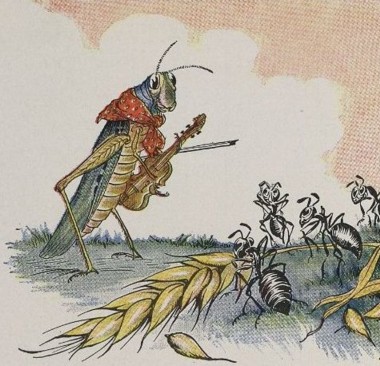 Once there lived an ant and a grasshopper in a grassy meadow.

All day long the ant would work hard, collecting grains of wheat from the farmer’s field far away. She would hurry to the field every morning, as soon as it was light enough to see by, and toil back with a heavy grain of wheat balanced on her head. She would put the grain of wheat carefully away in her larder, and then hurry back to the field for another one. All day long she would work, without stop or rest, scurrying back and forth from the field, collecting the grains of wheat and storing them carefully in her larder.

The grasshopper would look at her and laugh. ‘Why do you work so hard, dear ant?’ he would say. ‘Come, rest awhile, listen to my song. Summer is here, the days are long and bright. Why waste the sunshine in labour and toil?’

The ant would ignore him, and head bent, would just hurry to the field a little faster. This would make the grasshopper laugh even louder. ‘What a silly little ant you are!’ he would call after her. ‘Come, come and dance with me! Forget about work! Enjoy the summer! Live a little!’ And the grasshopper would hop away across the meadow, singing and dancing merrily.

Summer faded into autumn, and autumn turned into winter. The sun was hardly seen, and the days were short and grey, the nights long and dark. It became freezing cold, and snow began to fall…

You know exactly what happens next. The grasshopper, who has been singing and dancing the days away, becomes cold and hungry and asks the ant for a meal. The ant, who has spent all her days toiling (notice, in this particular version, the hard worker is the female), chastises the grasshopper and turns him away, accusing him of being lazy and idle. I guess the ant is not so down with the present moment living vibe, the seize the day philosophy and does not know that at any moment you can walk out of your house, be hit by a bus and that will be the end of it all.

I was just talking about this well-known Aesop’s fable with a friend because, for the entire month of August, my calendar is extremely busy. Busy in a way that makes me kind of anxious because everything is coming all at once and, as usual, along the way little things keep adding on top of my already loaded plate. As a full-time freelancer, however, these frenetic busy periods are often preceded by very relaxed and un-busy periods where I kinda drift from moment to moment, indeed resting a while, singing my song and living more than just a little. I happen to like the grasshopper and, in many ways, I think she has it just right, but in just about anything you find written about this fable, the grasshopper is described as “lazy.” The story is portrayed, rather simplistically, as a morality tale about the virtues of working hard and planning ahead. Everything else is just lazy idleness.

I am a true procrastinator by nature and the ebb and flow of work and idleness is well-suited for the habit of putting off what you could do today until tomorrow–though this could be a chicken and egg situation. But, I have come to realize that this is exactly how I operate. Procrastination is absolutely not an excuse I make for myself but, truly for me, a way to turn my nuggets of coal into diamonds under the hot, hard pressure of a deadline.  I’ve written about this here before and now, more than ever, I embrace this as a functioning pattern of my own production. It works. For me.

Children’s book author and illustrator, Leo Lionni, contributed a version of the grasshopper and ant story with his delightful book, Frederick. Frederick is a young mouse who, instead of working with the winter preparations, collects the rays of the sun, feels the sensations of the summer and writes poetry. When morale plummets during the winter, it is Frederick’s poems that get the mice through the long, cold nights.

So, I suppose that I am both the grasshopper and the ant. I love my down time. I love singing my proverbial song, lazing a day away and collecting the rays of sunshine to enjoy for a gloomy day on down the line. But, when it comes to the toiling labor that must be done, I will rally and focus, hopefully turning my little nuggets of coal into diamonds. And, despite what traditionalists might have us believe, I think the world needs both grasshoppers and ants. For it must be true that the ant worked more steadily and happily with the song of the grasshopper playing on the breeze. Right?

Today I left my own piled high plate of obligations to help someone else get their work done. My helping job was a frilly one– filling planter boxes with flowers and cleaning up the front of a new store. It was not hard work and I enjoy putting my hands into soil, planting things and seeing the way that growing stuff looks beautiful when you tend to it. I have heard the cicadas all summer, I’ve seen hundreds of butterflies and thousands of ants (unfortunately, in my kitchen), but I haven’t seen a single grasshopper. So, I’m going to take it as a sign that, after I got everything planted where it was supposed to be and took the watering can to the spigot, I spied this little gal. She was so laid back that she didn’t even flinch when I put my phone right up to her little spot on that leaf to get the shot.

TRY THIS WEEK: Be both the grasshopper and the ant. 🙂

I am an artist living in New Jersey. I write and illustrate children's books, paint, draw, blog, coach, teach and speak about creativity.
View all posts by Dar Hosta James →
This entry was posted in The Mondays and tagged Aesop's Fables, Creativity, dar hosta, dar hosta james, darhosta, Frederick, happiness, healthy living, procrastination, The Ant and the Grasshopper. Bookmark the permalink.