About a year ago I was doing a residency program at a school. A bunch of middle schoolers and I were working on a giant canvas mural, but the visit had started with a snafu when the canvas I’d ordered weeks before my arrival had become damaged in shipping. Despite the fact that the box was bent and ripped, no one at the school had thought to open it and I only discovered it the morning the project was to begin. Grrrrr. So, what followed was a frantic search at local Michael’s stores to find something that would be big enough, which we did find, and the painting went on without another hitch.

As an artist, I have always embraced the saying, “Waste not, want not,” and I have learned, like many creative folks, how to turn discarded or damaged stuff into something. Fortunately, I also have some OCD tendencies that keep this from becoming full blown hoarding–or at the very least make me a more organized hoarder. My life of things is a good balance between collector and neat-freakness. I did realize, however, that the damaged canvas could be pulled from its frame and used after the ripped portion was trimmed off. The trimmed off piece presented a bigger mental dilemma for me, though, because while it was as long as the edge of the large canvas, it was only about six inches in width. The art teacher did not think she had a use for it but I could not see throwing out a completely good piece of substrate. So, I cut it up into squares and when the group of kids I was working with would finish up their part of the planned mural, instead of dumping the leftover paint, I played around with it on the scraps. 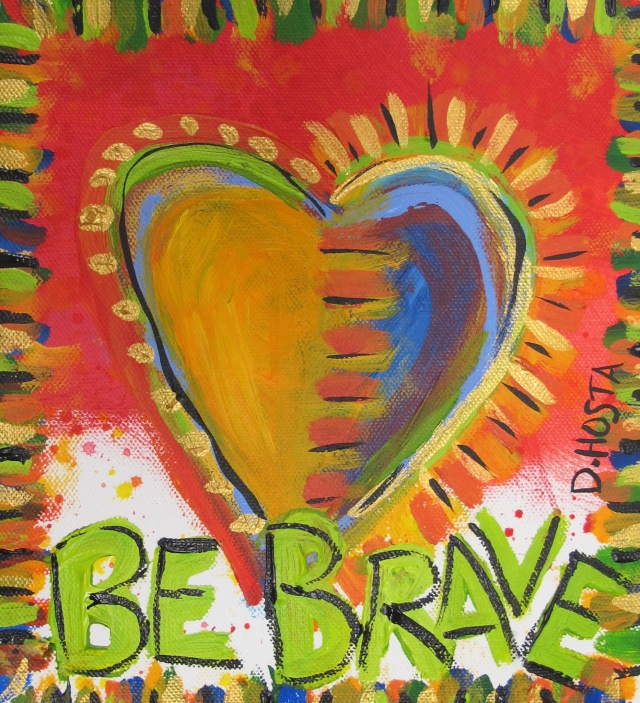 One of the scraps became a funky, colorful heart, below which I sloppily wrote the words “Be Brave.” The director I was working with on this project walked into the room and saw these little scrap paintings and fell in love with them. They were never intended to be anything but a way to use leftover supplies but I’ll admit they turned out pretty cool, if only for the fact that they happened fast and with crazy, unplanned colors. I gave all five of them to her when I left but the thought of the funky, colorful heart stayed with me. 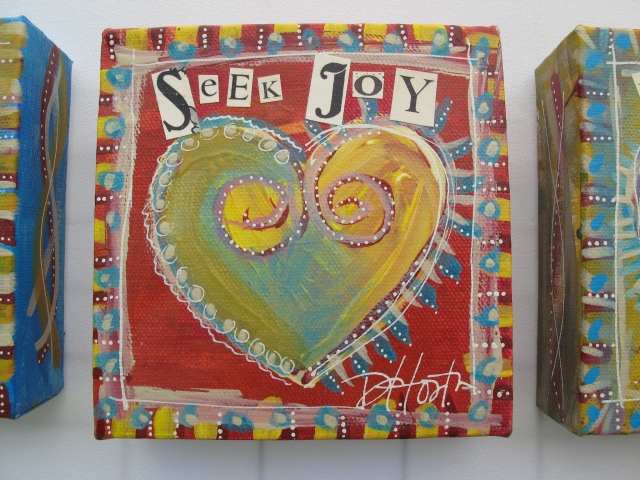 They became my “Wild Hearts,” and, at the moment, they are my most popular product and I actually have trouble keeping a complete selection on hand because they have resonated with people and I sell them quickly. I work on them in big groups and give them inspirational sayings like, “Seek Joy, Find Beauty, Laugh Often, Dream Big…” 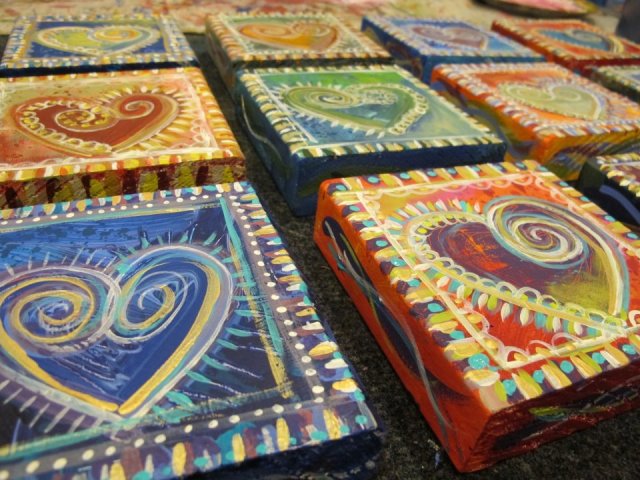 They are less planned and more spontaneous than my tree art and working on them is quite meditative. I personalize them for people who special order them and embellish them with wedding dates, birth dates and the names of loved ones who will be receiving them as gifts. It’s a feel good thing. 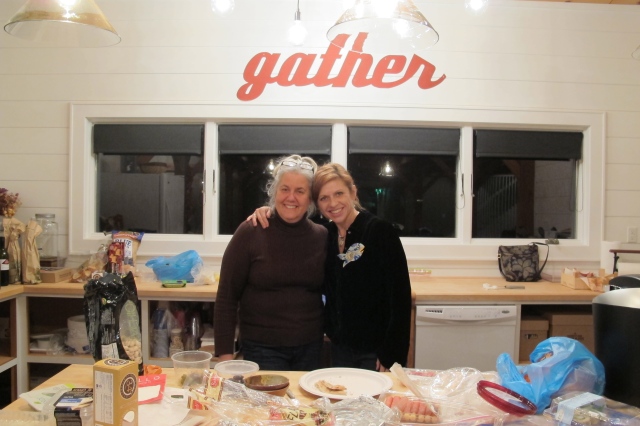 One of my best customers is this woman here, my good friend (and patron), Samie. She is a great big-hearted person who has spent her entire life doing all sorts of really good stuff for her community and for others, not the least of which is teaching for over three decades. Honestly, I can’t say enough about this person and I’m grateful that our paths crossed about four years ago at a Symposium for the American Horticultural Society. One of the projects I worked on in Youngstown, Ohio last week was a collaboration between us that we decided to call “Healing Hearts.” 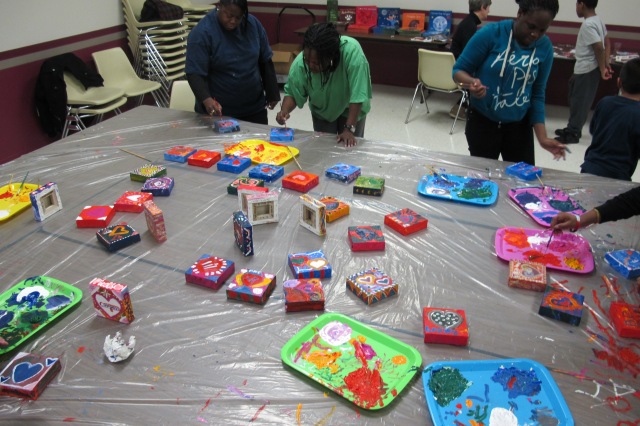 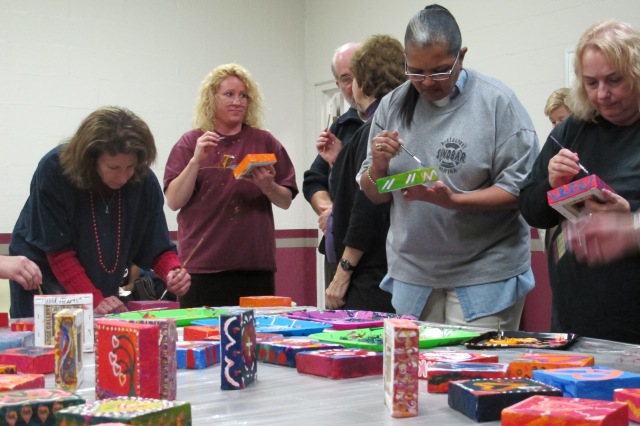 In an open house hosted by a non-profit organization that runs facilities for runaways, recovering addicts and battered women, staff, clients and their families became heart-makers and art-makers in a painting workshop that I directed. 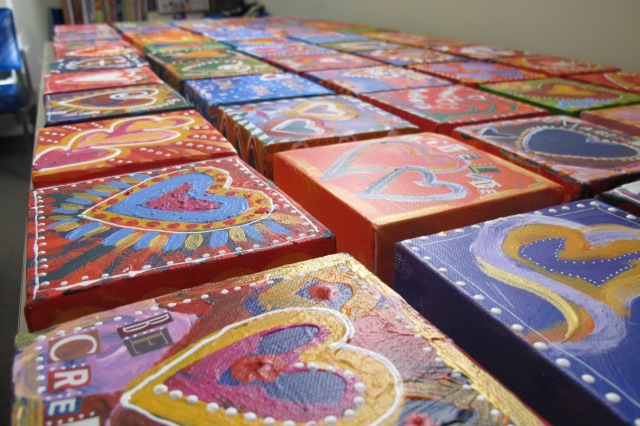 Over sixty hearts were made that night and, as people worked over these little canvases, their fears of not being good enough, of not having artistic talent, began to fade away in the joy that is creativity. There were refreshments and music and the crowd was lively and fun. In the end, we ran out of canvases and had to turn people away. Volunteers and other participants kept busy cutting out affirmations from magazines that would later be glued onto each heart. Children laughed and people stood around chatting even after they’d finished their heart. As the finished hearts grew in the center of the table, people came back into the room to admire the phenomenon that is the whole becoming bigger than the sum of its parts. It was a feel good kind of night. 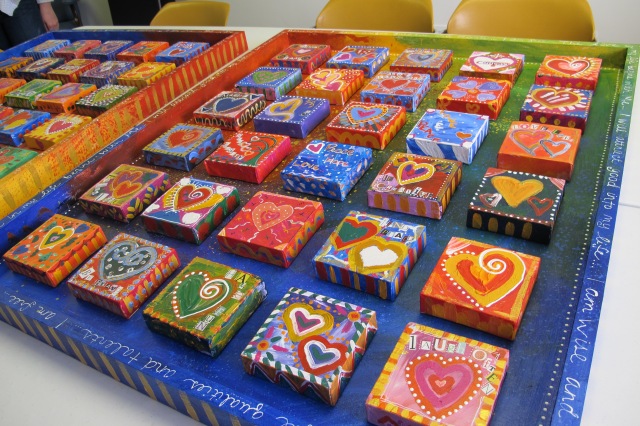 I went back the next day and painted two shadow box frames that will house the hearts. The pieces will be hung in the lobby of the main building so that clients who come in for services will see them immediately upon entering. The colors are bright and wild and, together, these hearts pack a really big punch. I would like to facilitate the making of many more of these beautiful art collaborations in all kinds of places where they would bring happiness and affirmation to people who need some… and, hey, that’s all of us, right?! 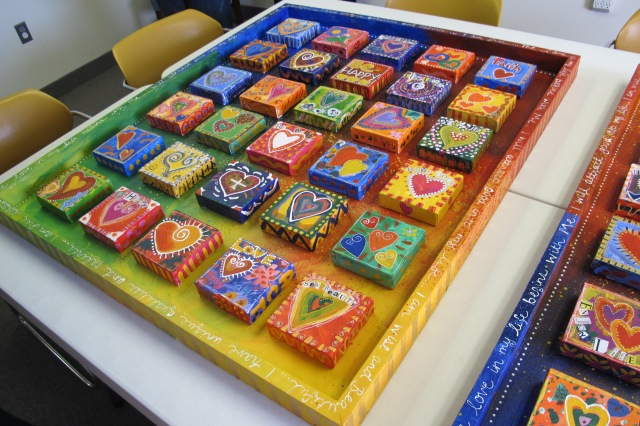 As  lover of words, I decided we needed not only the affirmations on the hearts but also something along the edges of the frames. My friend, Samie, had attended a vigil for the home for abused and battered women and one of the speakers was a woman who’d come through the other side of this nightmare. Her quote, as delivered at the vigil, is written around the outside of each one of the frames:

The love in my life begins with me… I will attract good into my life… I am wise and beautiful… I have unique qualities and talents… I am free. 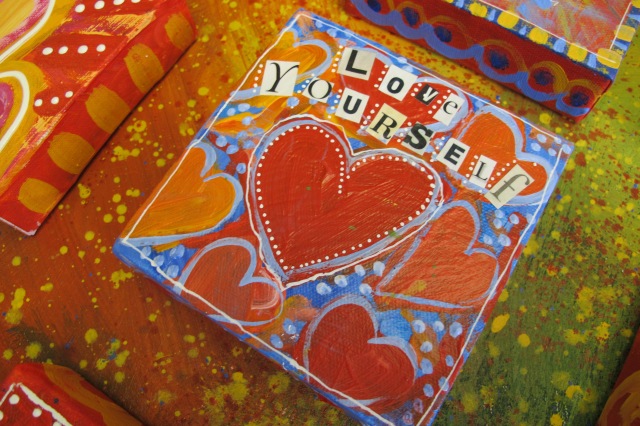 I have long believed that the Universe has special messages for all of us as long as we are willing to receive them and I see a clear path from that day when I couldn’t bear to throw away a scrap of canvas and this amazing community art project. I believe the Universe showed me a way to expand what I love and do through some playful, accidental art. I am most alive when I am working with others, making stuff and sharing ideas. The “Healing Hearts” project was a big bowl of goodness that fed all my passions and interests and created something that can keep on paying it forward to all of those who get to see it. And, looking at all of this stuff together truly touches my heart.

TRY THIS WEEK: Listen for your own call from the Universe.