One of the most common questions I get asked by children is “Where do you get the ideas for your books?” I usually tell them that’s easy; I just write about stuff I like, which is why you will never see me write a book about camping. Because I hate it. I’ve been camping twice in my entire life. The first time I thought it was terrible and the second time confirmed it was terrible. But, despite the fact that sleeping on the ground in a blanket bag, cooking over a smoky fire that I have to build myself and relying on the great outdoors (or worse, a pit toilet!) for a lavatory aren’t my cup of tea, I do love being outside. 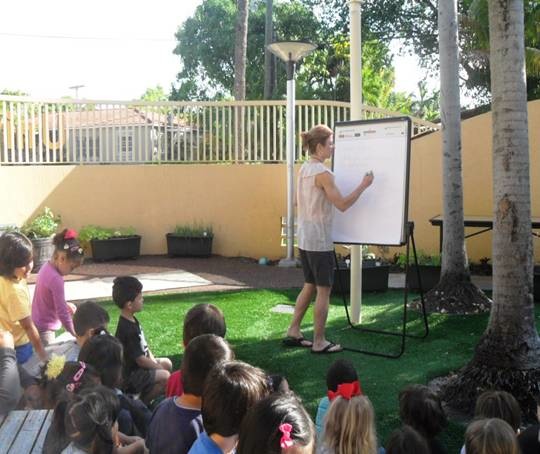 I’ve just returned from Miami where I taught two wonderful and charmed weeks completely and entirely outside.

While someone from the mid Atlantic can’t help but experience the feeling of exotic novelty that comes from being on a school campus that provides so many opportunities to be outdoors, kids in Florida are accustomed to it. One of the things that strikes me is the relaxed mood they exude lolling around during their breaks and lunch period, outfitted in shorts and ponytails as they text and talk beneath the shade of palm trees. There is a stereotype that we east coast folks have about people from warmer climes and, without wanting to be disparaging, you can kind of see it at work in places like this. Dude.

I worked ten straight days in a row, all of them outside, to complete nine large paintings that were done collaboratively with the nearly 1,000 students at Miami Country Day School. (You can see a collection of these photos on my Flickr set.) Nine big paintings is a tall order in any amount of days, especially eight (which is why I even came in on Saturday and Sunday to keep them going). Getting kids in and out of the classroom to do their part and directing them as they try to envision a finished product that is days away from completion can be a challenge. But, you know what? It was a breeze, a literal and figurative breeze blowing off the warm waters of Miami, and I daresay that I came back not only invigorated and inspired, but as if I’d taken a vacation rather than worked a busy residency. And I think it was being outside that made all the difference.

When I came home, I spoke with a good friend about this experience and the idea for today’s post was hatched. Forget about camping for now and just think about the world outside walls and windows, the world beyond cars and classrooms. The questions I would like to pose to you are: How much time do you spend outdoors? When and why? How does it make you feel to be outside? Do you like it or not?

As my friend and I thought about this topic, we wondered if a preference for being inside or outside says something about the person. I pondered the idea that going outdoors, even just to sit and stare at the sky, can, at least for me, take the edge off anxiety and depression and is a much better solution to problem solving than staying in bed all day or plopping in front of the television or computer. As a runner, there truly aren’t many kinds of weather that can keep me indoors and I marvel at how tedious and unpleasant the same five miles can be on a treadmill on the rare occasions that I am forced to use one (usually while traveling for business). During the winter I run in temperatures so cold that my face becomes as numb as if I’ve had novocaine and, in the summer, I beat the heat by hydrating adequately the day before and getting out there before 7:00 a.m. if possible. No matter my mindset, it is always improved by running outside. But, is it the running or the outdoors? Because I always feel so bad about my treadmill experiences, I believe it’s both.

I’ve always been a little annoyed that the easiest chit-chat to make and the most convenient thing to complain about is the weather. In my opinion, we’ve probably become a little spoiled about weather by being able to know so much about it before it happens. I try really hard to never complain about weather because I think there is something nice about all kinds of weather and I don’t want it to be a deterrent to getting out of my house. I know many people who won’t do this or that outside because, well, it’s too hot, too cold, too wet, too windy, too weathery! I like that saying that says there’s no such thing as bad weather if you are dressed appropriately, but of course there are people who will complain about just about anything when given the opportunity. Weather is just an easy target but how we experience weather and the outdoors is actually all in our minds.

The most recent NY Times Magazine just published an amazing collection of articles for their theme, All In Our Minds. The array of topics is fascinating–from making ourselves smarter to weight denial to the history of depression and dementia in Down Syndrome individuals, but not one single article talks about humans, and their mental well-being in relation to the world around them. In Medical Daily, however, there is an interesting article on how being next to the ocean boosts more positive feelings than any other setting. I’ve written about my love of oceans on several occasions and can attest to this mood boosting feature of being seaside. Another article in Science Daily reports on a large scale study on mood and physical well-being that results from an outdoor lifestyle versus an indoor one. Doing a search on the benefits of being outdoors yields tons of studies and articles that deliver the important message about being outdoors: it’s simply better for us. Educators and parents who are concerned, for good reason, about shrinking recess periods and over scheduled children call what’s happening to our kids “Nature Deficit Disorder,” and in some of the circles I run in have tweaked the NCLB (No Child Left Behind) acronym to NCLI–No Child Left Indoors. We’d be wise to think about how being mostly indoors will affect an entire generation of children.

So, yeah, I hate camping. Of course, you might say that if I follow my own philosophy, I’ve really got nothing to complain about except poor preparation and a bad attitude. I know. I should probably give camping a third try to let it be the charm, but I still think I might hate it, if only because of the toilet problem. And, another thing I hate is to have a song running through my head that I can’t shake no matter what I do! When I came up with the title of today’s post, my friend began singing a few bars of a classic song by the BeeGees, Inside And Out, with a suggestion that, for your listening pleasure, I link to the Feist remake instead. I’ve now had that song in my mind for about 13 hours. And, I love Feist but I kinda hate anyone who wants to mess with my BeeGees… I think I’ll download the original version onto my iPod and take it on this afternoon’s run.

TRY THIS WEEK: Take it outside, friends. It’s not too hot, too cold or too anything. I promise.

I am an artist living in New Jersey. I write and illustrate children's books, paint, draw, blog, coach, teach and speak about creativity.
View all posts by Dar Hosta James →
This entry was posted in The Mondays and tagged being outside, dar hosta, happiness, healthy living, nature, outdoor living, outdoors, running. Bookmark the permalink.